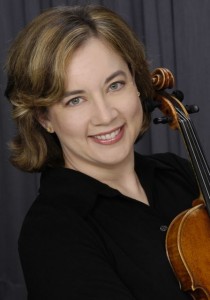 Lisa Ferrigno has served as Concertmaster of the Brevard Symphony Orchestra since 1999. A native of New England, she received her early musical training at the New England Conservatory and holds degrees from the Eastman School of Music and The Florida State University.  Ms. Ferrigno has appeared frequently as soloist with the Brevard Symphony. She has also performed concertos with the Orquesta Sinfónica de Trujillo and Orquesta Camara del Festival Internacional Bach in Perú, as well as with the Florida Symphony and Orlando Philharmonic Orchestras. As a chamber musician and recitalist, Ms. Ferrigno has performed in festivals throughout the United States and internationally in Perú, the Czech Republic, the United Kingdom, Switzerland, and Germany.

As an educator, Ms. Ferrigno teaches privately and coaches students in the Brevard Symphony Youth Orchestra and Metropolitan Area Youth Symphony in Orlando. She is on the faculty of the Brattleboro Music Center in Vermont, where she teaches students of all ages and coaches chamber music. She has served on the faculties of Stetson University, the University of Central Florida, the Putney School in Vermont and Blue Lake Fine Arts Camp in Michigan. She was a member of the conducting staff of the Florida Symphony Youth Orchestra and was the founder of the FSYO’s Stringmania Summer Day Camp.

Ms. Ferrigno enjoys exploring different styles of music. In recent summers she has attended Mark O’Connor’s Fiddle Camp in New York City and the Mark O’Connor/Berklee College of Music Summer String Program in Boston, Christian Howes’ Creative Strings Workshop in Ohio and the Open Music Collective Summer Jazz Intensive in Vermont. She is a veteran of studio recording sessions in classical as well as pop, jazz, and traditional music styles.

Ms. Ferrigno resides in Winter Park with her husband oboist Aaron Hilbun, Leia the Dachshund and three old cats. They have a second home in New England, where Ms. Ferrigno performs with the Boston Pops Orchestra, the Handel Society of Dartmouth and Opera North.