The BSO is Orchestra-in-Residence at the King Center for the Performing Arts. We bring quality performances, educational programs & outreach opportunities to everyone in our community.  Through your support, we are proud to be the Space Coast’s only all-professional orchestra. 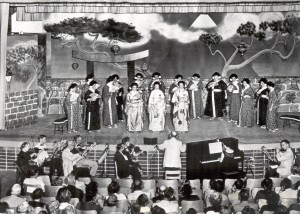 In January 1954, an orchestra was needed to provide the accompaniment for The Mikado, which was being presented by the Northrop Glee Club. Thirteen musicians assembled for this purpose under the direction of Frederick Jaehne and called themselves the Brevard Light Concert Orchestra. After the conclusion of the show, they decided to remain together permanently.

Concerts were held regularly for the next several years. In 1966, the Brevard Symphony Orchestra (BSO) incorporated as a non-profit organization.  Joseph Kreines took over the baton and implemented the first season series.

In 1969, a Board of Directors from the community was formed. Maria Tunicka served as Music Director and Conductor of the BSO from 1976 to 1986. In 1986, the Board of Directors established a Search Committee to undertake, organize and effect the search for a new Music Director and Principal Conductor of the BSO. The culmination of the search was the June 1987 announcement of Kypros Markou for this position. During the 1987-88 season, Maestro Markou led the first performances of the BSO in the new Brevard Performing Arts Center (now known as the King Center for the Performing Arts), where the orchestra has been designated “orchestra-in-residence”.

In the spring of 1994, Kypros Markou announced that he would be leaving the BSO to accept a position at Wayne State University in Detroit. Once again, the Board of Directors established a Search Committee. In the spring of 1995, the BSO Board of Directors announced the appointment of Christopher Confessore as the new Music Director and Principal Conductor. Maestro Confessore continues to lead the BSO as well as currently holding the position of Associate Conductor of the Alabama Symphony Orchestra.

The Administrative Offices of the Brevard Symphony Orchestra were located in a building located at 1500 Highland Avenue, Melbourne. This structure is known as the Winchester Symphony House and was built in 1886. There has been extensive renovation on the building over the years and it is currently listed as a Historical Site for Brevard County.  Recently, the administrative offices have relocated to 1500 West Eau Gallie Boulevard, Suite A-1, in Melbourne while the Symphony House is under renovation.